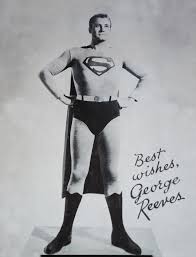 Did you know that television’s original Superman, George Reeves, resided in Cincinnati? Well, he was dead…but he was here.

When the man of steel passed away on this day back in 1959 he was at the height of his career playing the lead role on TV’s “Adventures of Superman.” Speaking of adventures you will see that even in death more were in store for Superman, namely the one that brought him here to Cincinnati.

The circumstances surrounding the death of the 45 year old Reeves were quite mysterious. He passed away from a gunshot wound to the head with a houseful of boozed up people after a very public argument with his fiancée, Lenore Lemmon. It seems, at least on that night, Superman wasn’t faster than a speeding bullet. The case was a real whodunit, however in the end despite multiple incoherent stories from people who were in the home on that fateful night, his death would be ruled a suicide.

So how does a Hollywood actor who was shot and killed in his Benedict Canyon home end up in Cincinnati? Well, apparently his maternal grandparents are buried at one of the cities most beautiful cemeteries, Spring Grove. So when Reeves mother, who didn’t buy the suicide story, had his death investigation reopened she also decided to have his body shipped cross country for a second autopsy which was to be performed here in Cincinnati.

After the autopsy, which yielded similar results to the first, despite some previously undocumented bruising, the remains of George Reeves were held in White Pine Chapel at Spring Grove Cemetery. This chapel served as a holding vault for bodies awaiting burial. Reeve’s mother sent a telegraph on August 18, 1959 instructing the catetakers at Spring Grove to bury George on the same plot with her parents. She also stated “I would like to have a private mausoleum built for my son, Superman.” Yeah, Superman…no given name. No surname. Just keeping it simple- Superman.

Unfortunately there wasn’t enough room for a large mausoleum on that family plot so a change of plans was in order. She had him cremated. Not long after, Superman flew one last time- back to Hollywood.

Death of Superman may not have been a suicide. Augusta Chronicle. December 3, 2000