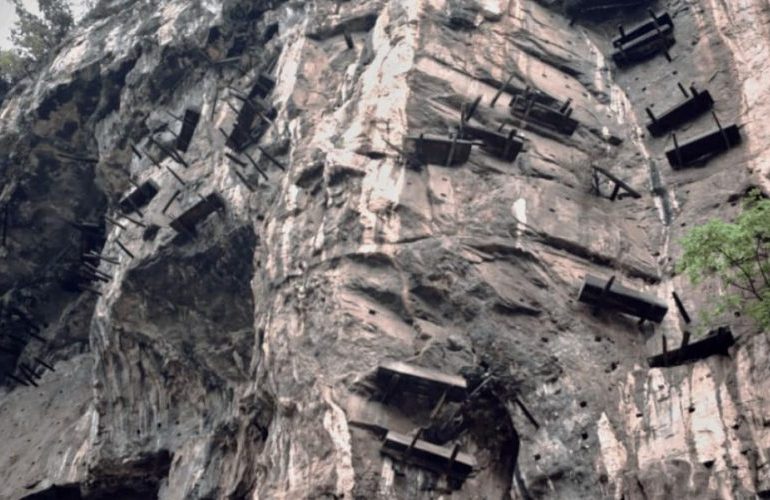 The mysterious Hanging Coffins of Sagada located on Luzon Island in the Phillipines demonstrate the unique funerary traditions of the Igorot, an indigenous tribe from the area. The coffins, which are hung with ropes and wires, are suspended along limestone cliffs and have fascinated visitors for centuries.

There are some interesting guidelines surrounding eligibility for a hanging coffin.

⚰Tribe members were responsible for constructing their own coffins prior to death, which are notably small due to being interred in a fetal position.

⚰This method was reserved for those who died of natural causes.

⚰Infants and people who died from illnesses were not eligible for a hanging coffin as the tribe believed it would bring bad luck.

The events following the death of an Igorot tribe member take several days and kick off with a communuty celebration. Pigs and chickens are butchered and prepared for feasting while the decedent is placed in a “sangadil” or death chair and then bound with vines, and covered with a blanket. The body is then positioned near the front door of their home so that relatives and fellow tribe members can pay their respects. To slow decomposition the corpse is smoked which also aids in concealing odors. This vigil is held for several days before the body is taken to it’s final resting place. Prior to being transported the corpse is positioned knees to chin and wrapped tightly in the blanket and tied with rattan. The Igorot believe that the body in a fetal position most closely symbolizes birth and is therefore the desired configuration. Unfortunately in order to assume this position, many bones in the body have to be broken. According to Soledad Belingom, an Igorot elder who was interviewed back in 2014, some families couldn’t bear to break the bones so their loved one had a more conventional casket.

The are several reasons the Igorot opted for hanging the coffins cliffside; namely it was a literal attempt to assist their loved ones in reaching a higher plane, closer to their ancestral spirits with the highest coffins belonging to the most valued tribe members. There are also practical reasons for the custom including a general fear had by many elders of being buried in the ground, protection from animals and back in days of headhunters, keeping your ancestor intact from those nefarious conquests.

Very little is written about this Igorot tradition and word of mouth is the method most commonly used to pass down information regarding the practice. With that said, some date this Sagada custom back over 2000 years which is difficult to prove as after a few hundred years these hanging funerary boxes tend to break apart and deposit their contents on the ground below.

The practice of suspending coffins isn’t just relegated to the Philipines, it also exists in Indonesia and Southern China where it is believed to have originated with the Bo and Guyue Tribes. There it can be definitively traced all the way back to 1027 BC.

It’s a dying tradition, the few remaining tribal elders will “close the casket” on these ancient rituals of Sagada, as more and more of the younger generations are opting for a modern burial.