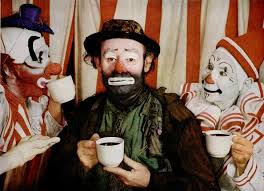 So did you know December 9th is a day sat aside to celebrate Weary Willie – wait – what? Ok, so if you didn’t know, circus clown ‘Weary Willie’ was created by Emmett Kelly Sr., who was born on this day back in 1898. While I’m happy to celebrate the art of clowning and it’s impact on our culture, it was the unsettling information I found after going down the rabbit hole that prompted me to write this post. Mass casualties, tragedy and even murders taint the stories of several generations of the Kelly clan and today I will share those stories. Did you expect anything less?

It was the senior Kelly who created the character ‘Weary Willie’ based on a sketch he made as a young cartoonist that was inspired by the hobos of the great depression. He wore tattered clothes, had a big round nose and was scruffy and unshaven. At one time Weary Willie was considered to be the most famous clown of the 20th century.  If his name doesn’t ring a bell you may recall his famous act where he tries to sweep up a spotlight into a dustpan only to be startled by it’s continual reappearance. Emmett Kelly Sr., performed with multiple circuses, including The John Robinson Circus which wintered here in Cincinnati, as well as the Ringling Brothers and Barnum & Bailey Circus. But it was at the 1944 Hartford Circus in Connecticut when disaster struck, the Senior Kelly was present during the devastating fire which killed 167 people and injured 700 more. A photograph taken of him on that fateful day was featured in Life Magazine, a surreal image of a clown heading toward the burning big top with a small bucket of water. The fire affected Kelly deeply and for the remainder of his life; he once said the Hartford Circus Fire was like a movie forever playing in his mind that he could not turn off. According to his grandson, Joey Kelly, he “rarely spoke of the fire to anyone other than family.” The Senior Kelly would retire from Circus work in 1956 but would perform here and there up until 1979. It was during March of that year he would suffer a fatal heart attack while taking out garbage at his home in Sarasota, Florida. He is buried in the Rest Haven Memorial Park, in Lafayette, Indiana.

Emmett Kelly Jr,. would be the next to embody the character of Weary Willie. He was born in Dyersburg, Tennessee back in 1924 while his father was touring with the John Robinson Circus. The junior would not resurrect the Weary Willie character until 1960, some four years after his father’s retirement. Weary Willie 2.0 made his debut at the circus in Peru, Indiana. Some say that the elder Kelly was not happy with his son’s decision to play an almost identical character others say he was supportive. Emmett Jr. would claim his version of Weary Willie was less sad. The junior Emmett Kelly would marry Dorothy Coffee and together they had 5 children, a son Paul Anthony Kelly would suffer an unfortunate train accident not long after his father began touring and ultimately lost his leg. When Kelly Jr. heard of his young son’s accident he came home, but didn’t stick around for long. After a short visit with he hit the road again proclaiming “Willie’s got itchy feet.” All that touring did not bode well for the marriage and unfortunately Emmett Jr., and Dorothy divorced in the ’60s. During the proceedings Dorothy said that she felt the character of Weary Willie had literally taken over her husband.

His marriage may have been broken but his act was more successful than ever. The Weary Willie character was one of the top attractions during the World’s Fair as well as a travelling ambassador for Kodak. It was during this time the younger Kelly became the worlds most recognizable and photographed clowns. He was even invited to The White House, twice.  By the mid-70’s Junior had founded his own circus, the Emmett Kelly Jr., All-Star Circus and by the early 80’s Weary Willie was everywhere. The ubiquitous character inspired all sorts of knick-knacks, countless styles of clown collectibles and figurines were made in his image.

Enter the third generation. Paul Anthony Kelly, whom I mentioned earlier, the grandson of Emmett Sr., continued the family tradition and began touring with his father Emmett Jr.’s newly formed circus. He worked as a high wire artist, missing leg and all, and he was fascinated with the character of Weary Willie. Paul thought the he was destined to continue the family legacy. He would dream about Willie and waited patiently for his Dad to retire the act. I found a source that claimed Paul even spoke of legally changing his name to that of his father and grandfather, Emmett Kelly III, although I found no proof he ever did,

Eventually he headed to California to seek fame as the third incarnation of the family namesake, Weary Willie. Things didn’t go as planned for the newly minted clown. While staying with his sister and working to make a name for himself Paul would perform shows for local children. He would embody the character of Weary Willie going as far as taking on the demeanor of his predecessors, adopting all the same gestures and facial expressions and vocal intonation. He once said “Sometimes I felt as though Willie was taking over my body, just as he did my father and grandfather.” As he continued to perform he was able to save up enough funds for a new apartment. When asked why he opted for 2 bedrooms he said, “One for me, and one for Willie.”

Friends and family began to notice an internal struggle of sorts. While Paul was obsessed with the idea of being more famous than his father and grandfather, he also felt trapped by the character. He said, “I do a lot of thinking about my other self, the little hobo.  I start feeling sorry for the poor little guy: seems more like he is somebody I know instead of just me working for a living. I’m really getting so I feel like two people — me and the little tramp. And, so help me, I’m beginning to like the little guy better than I like myself! And I kind of hope he feels the same way about me….”

Living with Weary Willie as his alter ego didn’t do any favors for Paul Anthony Kelly, he began hanging out in bars, drinking to excess and developed a nasty drug habit. By late 1979 the 22-year-old added murder to his list of pernicious proclivities. On November 4, 1979 the body of Los Angeles antiques dealer Brent David Bailey was found in the backseat of a car parked in downtown San Diego, he was just 22 years old. He appeared to have been beaten to death his head completely bashed in. Less than 2 weeks later the body of retired theology teacher, Henry B. Kuizenga, 66 was found bludgeoned to death in a beach side cottage in Oceanside, where he was penning a book.

Kelly would end up pleading guilty to two counts of murder. During testimony at his pre-trial hearing it was revealed that the victims were found nude, their skulls crushed by repeated blows from a blunt instrument, and indicated both had been sodomized. Superior Court Judge Michael Greer sentenced him to a term of 25 years to life for the first-degree murder of the Reverend Kuizenga and 15 years to life for the second-degree murder of Brent David Bailey. He is currently housed at a State Prison in Corcoran, California where he has been since September 24, 1980. His grandfather had passed 7 months prior to him committing the murders. His Dad, Emmett Jr. lived until November 29, 2006, he is buried at Southern Arizona Veterans Memorial Cemetery.

In the end, the spotlight that Weary Willie tried to sweep away in his signature schtick, slowly dimmed with each subsequent generations portrayal of the rag tag, down-on-his-luck circus clown. Until it burned out entirely.

After all, they were big shoes to fill.

6 thoughts on “SAD CLOWN: THE TRAGIC LEGACY OF WEARY WILLY”