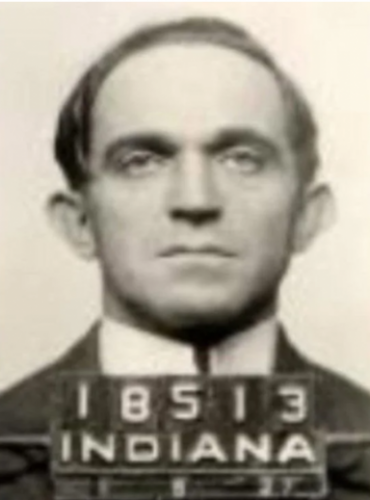 On this day back in 1936 the headline of The Cincinnati Enquirer proclaimed ‘Hicks Condemned to Death.’ Justice was swift as it would take a jury less than 15 minutes to convict  Heber L. “Jimmie” Hicks. So what did he do? Hicks was the mastermind behind a murder that became to be known locally as the Head and Hands Murder. The victim, former Cincinnati Fire Captain Harry R. Miller.

It all began on a warm summer day, June 27, 1936, when three boys who were swimming in a lake near Carrollton, Kentucky noticed something a couple feet below the surface of the water. It was a box. As they reached down and began to pull it up they not only realized it was heavy but they also noticed a human hand sticking out of the concrete inside. Local police were contacted and during the investigation detectives found two hands and a man’s head. It turned out these body parts would be connected to a mystery that began some two weeks earlier.

You see the same day the paper reported the Hick’s verdict they also ran a chronological detail of how the heinous crime played out with their sensationally titled piece “Ghastly Crime Story Unfolded With Finding Of Severed Head: The brutal murder of Harry R. Miller.”  The following is transcribed from that story, “A respected and modestly wealthy retired Cincinnati fire captain, attracted widespread interest in three states. Interest in the case reached a high pitch as the gruesome details of the slaying were uncovered one by one. This is how the story developed: On the morning of June 12, at an isolated spot near Carrollton, Ky., a farmer found certain things a pool of blood, an ax, bloodstained handkerchiefs, and several other objects which led him to believe that a murder had been committed. The incident was recorded with a paragraph in the Cincinnati newspapers. On the morning of June 28, near Eminence, Ky., 20 miles from the point where the pool of blood had teen discovered more than two weeks before, the headless torso of a man was found under a culvert. Still the story received but scant attention in Cincinnati. The murder received its first streamer headline in The Enquirer on June 29, the morning after the head and hands of a man were found imbeded in concrete in a cardboard box in a lake near Carrollton. On the following day three New Trenton, Ind., neighbors of Miller identified the head as Miller’s. On the following day Miss Flora Miller, the murdered man’s sixty-six-year-old sister, and her chauffeur, Heber L. Hicks, a former convict, drove to Carrollton to view the head. They did not identify it. On July 2, Hicks and Miss Miller were arrested by Indiana state police at Miller’s home. They were held incommunicado for five days, during which time state police whisked them from one Indiana jail to another. At the Seymour, Ind., state police barracks on July 7, after 28 hours of questioning, Hicks confessed. He exonerated Miss Miller. In his statement Hicks said he hired John J. Poholsky, William A. Kuhlman, and Frank Gore Williams, all former convicts, to murder Miller in order that he, through Miss Miller, might acquire Miller’s fortune. Hicks said he was in Cincinnati when Miller was beaten into unconsciousness at his home on the night of June 11, later shot to death, then taken to Kentucky, where his body was dismembered. Hicks and the three men he named as the slayers were indicted for first-degree murder last August in Franklin County, Indiana. Three weeks before Hicks’s trial was scheduled to begin, Poholsky was arrested in Warren, Ohio. He readily admitted his part in the murder that of cutting off the dead man’s head and hands. Poholsky contradicting Hick’s story, said that Hicks was not in Cincinnati when the slaying took place, but took an actual part in the murder. Poholsky appeared as the state’s first witness against Hicks in the trial at Brookville, Ind. Four days after the trial started, Kuhlman was arrested in Portland, Ore. Indiana state police returned him to Indiana by airplane in time for him to testify as the last witness against Hicks. He told a story which agreed in all major details with Poholsky’s account, and which named Hicks as the brains and the paymaster of the murder. The third killer named by Hicks, Williams, was arrested last week in San Francisco, Calif. He is now on the way to Indiana to answer to the murder charge. He, too, has admitted complicity in the crime. After he repudiated in court the confession he made at Seymour, Hick’s defense was that Miller’s murder was planned and paid for by Miller’s sister, and that he, (Hicks) had no knowledge of the slaying until the morning after it had been committed. Hicks’s trial started at 9 o’clock on the morning of December 7.”

So there you have it the story of the Head and Hands Murder. In the end all 4 men were sentenced to death. During Hick’s trial blamed Miller’s sister Flora, saying she wanted her brother dead because she needed his money, and that she had been stealing from him along. As his sentence indicates Hick’s finger-pointing didn’t help his cause and he would hear his verdict without visible emotion. Judge O’Bryan stated, “You will be taken by the Sheriff of Franklin County to the Indiana State Penitentiary at Michigan City where he will deliver you Into the custody of the warden. You, Heber L. Hicks, will on April 10, 1937, before sunrise, be put to death by electric current in accordance with the verdict of this Jury and the laws of the State of Indiana.”

In the end Flora Miller inherited her wealthy brother’s estate. The murdered fire captain’s shrewd investments would result in her windfall. As years passed Flora grew more and more eccentric, taking up permenant residence at the then posh Alms Hotel in downtown Cincinnati. She even purchased a 12 room house to store her antiquities – while living in an apartment the hotel. By 1954, Flora was holed up in her apartment which she hadnt left in 7 years. Alms staff contacted police when the 83 year old became hysterical, shouting and threatening to shoot anyone who tried to enter her apartment. Police entered – with a battering ram. It was a complete hoarding situation, Flora was living in deplorable conditions surrounded by expired food and garbage. But it wasn’t all garbage an auctioneer who was charged with inventory of the apartment contents said it was “the most bizarre collection of stuff I have handled in many years. Here is a collection of mid-Victorian and late Victorian personal effects and domestic equipment that has never been equalled by the contents of any home I ever have seen in Cincinnati. Some of this stuff is magnificent, and some of It is just junk.”

Flora was declared mentally ill and the courts committed her to a sanitarium. She remained there until her death in 1962. She was 91 years old. In the end, her estate was valued at a little over $200,000.00 which is equivalent to about 1.7 million dollars today.